Some day the world is going to end:

Maybe God will initiate End Times? (This is what I think)

But then maybe humankind will nuke itself out of existence?

Or maybe an enormous meteor will slam into the Earth and kill everything except cockroaches and ants?

Maybe the world will end tomorrow 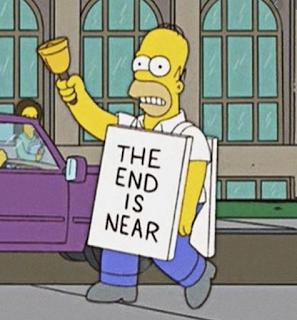 Regarding the return of Jesus, which Christian eschatology says will begin End Times, Matthew 24:36 says:

But about that day or hour no one knows, not even the angels in heaven, nor the Son, but only the Father.

The original follows of Jesus expected him to return in their lifetimes so sold all their possessions, thinking they'd no longer need them.

The point is: we have no idea.

I think the most prudent thing to do is for we humans to commit to improving our Planet, to make it a much better place for future generations. As opposed to sitting about waiting for The End.

Indeed I think we humans should forget entirely about Doomsday. And focus instead on the future.

It is the duty of every generation to leave the world in a better condition than what they found it in. We should fulfil this duty rather than waiting about for the rapture, or the tribulation, or whatever.

That would be a more productive use of our limited time here on Earth!

Perhaps it would help if we made a game of it? I don't know.