Scripture of the Day - Day 2

So, here is my second entry! In it I'm citing my favourite bible edition (the Good News Translation) alongside the Amplified Bible, which I think is very useful in that it attempts to clarify the intended meanings of terms.

The Father and I are one

I and the Father are One [in essence and nature]

1) My Thoughts On The Mater - The Trinity

So, in this scripture it is Jesus talking...

He is saying that there is a distinction to be made between "I" (himself) and "The Father" yet he is also saying that they are both different parts of the same thing. 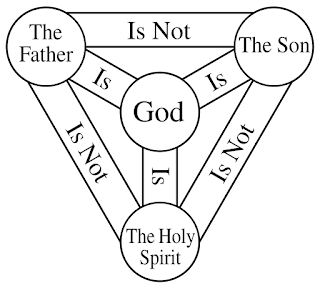 Separate parts of the same thing!
Is that really so hard to understand? What's all the fuss about?

Here is the link: https://www.edwardsmission.com/2020/12/scripture-of-day-day-1.html

2) My Thoughts On The Matter - Different Essences

I believe that Jesus was formed out of the divine essence, out of the same substance as God

I believe the essence out of which Jesus was formed has always existed, but that it is only recently that (in the case of Jesus) it was made separate and then moulded into Jesus, and so became an independent entity in its own right: Jesus Christ himself

He was therefore crafted, but not created!

But what about us humans? We haven't always existed, that's for sure. What about us?

I think that we developed out of the natural universe. I believe the biblical creation account to be allegory  - true, but not literally true! - I believe that the cause of human life can be traced all the way back to the Big Bang: which was caused by God!

There is therefore a distinction between creator and created

Finally, consider this: If humans and God were of the same substance, why would Jesus need to say that him and The Father were "one"? I think that by saying he and The Father are "one" he is also saying that humans are not "one" and are therefore in a different category of existence to himself and The Father! By including himself in that category (along with God) he is excluding everyone else from that category, i.e. all humans

By including himself with God in The Trinity he is also excluding humankind from The Trinity and placing us in another category of being - the subjects of God, rather than God himself

What does this scripture tell us?

That's how I understand it, anyway!